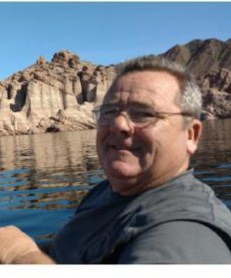 BORN
1952
DIED
July 18, 2020
On July 18, 2020, Garland Saip passed away at 67 years young. Garland grew up in Belleville, Kansas, but moved out to Las Vegas, Nevada in his early twenties to be closer to his sister who was stationed at Nellis Air Force Base. He moved into an age restricted area as soon as he qualified because his neighbors were too loud. Garland retired from the Excalibur Hotel as a plumber and was a long-time proud member of the Union of Operating Engineers. He then settled down, figuratively and literally, in Boulder City, Nevada, to be closer to his home away from home, the Boulder City golf courses. Garland was passionate about golf, or was it obsessive? His golf community was his second family. Garland also spent endless nights cocooned in a sleeping bag on the deck of his fishing boat on Lake Mead or the Colorado River in part for the fishing, but mostly because he loved the water. The only reason he relented to his kids' insistence to get a smart phone was so he could easily monitor the wind speed on the water. Garland had a story for every occasion and most of those stories shared a common theme about getting himself out of trouble, especially when the story surrounded his earlier years. When he started a sentence with, "you want to know something I realized?" you knew he was about to tell you about some new number pattern he figured out, like with his kids' current ages, because he was a wiz with numbers. Garland went from calm to spitting mad in the blink of an eye, not without reason, but still earned him the nickname "Taz" on the golf course. If he was not the first to arrive, he was late, and he was never late. Garland easily created new games especially if it meant he could trick his kids to practice golf or study. He made up songs to sing to his kids when they were young and played with his grandkids and great nieces and nephews like he was a kid himself, often times instigating trouble, but knew no one would mind. Garland was preceded in death by his mother, father, and a sister. Garland is survived by his brother Sid Saip and sister Wanda Ray, and his four children, Nichole Saip, Brian (Yolanda) Saip, Candice Saip and Christopher Saip and also his three grandchildren, Dominic Jackson, Colton Barker and Sierra Saip. In lieu of services, his children will host a memorial event at a later time.

No services scheduled.
To plant trees in memory, please visit our Sympathy Store.
Published by Boulder City Review on Aug. 6, 2020.
MEMORIAL EVENTS
No memorial events are currently scheduled.
To offer your sympathy during this difficult time, you can now have memorial trees planted in a National Forest in memory of your loved one.
MEMORIES & CONDOLENCES
1 Entry
I met Garland when he moved in across the street from me a few years ago. He was a good neighbor and always ready with a wave and smile. He was proud of his home and his family and yes he loved spending time on the water in his boat. It's hard to look across the street now and not expect to see him coming and going. I will miss him. My sincere condolences to his family. God speed Garland.
Steve Farinella
Neighbor
August 6, 2020